Set your B2B marketing strategy around your buyers’ maturity

How you set your target market, your channel, your product, your pricing, your competitive strategy – that is everything – depends on the answer to one simple question. Get that right and strategy’s a walk in the park. Get it wrong and you’re dead.

Set your strategy around your buyers’ maturity, not your product

So what’s that one thing that you need to know? Well, I actually don’t care whether you’re a start-up or the gorilla in your market. What we do care about is how obvious the decision to buy at all is to your target market. Let me explain.

In this video, I show you how to set your strategy around your market, not your product. We’ve all seen a maturity model. Laggards and early adopters, they’re terms that even our kids use. We understand these terms, we know what they mean. So, where are you and where your competitors on this model? Turns out, that’s completely the wrong question. I don’t care where you are. The question is where is your buyer? Let me explain.

Imagine an early adopter. No one else has bought before so they have no proof. What is it that they’re looking for, this courageous early adopter? Well, they’re willing to make the bet to be the first to come on board to a new product if they can get some advantage. So, should you be selling to this vertical market or this vertical market? The answer is neither of those. There isn’t yet a vertical market. There’s a propensity or a willingness, a capacity to be the first in their market. You should be selling really broadly, kind of anybody who looks like an early adopter who might gain some early advantage. And, you’ll learn from it.

Should you be selling a complete solution? Fairly early adopters probably want to bend the solution a little bit. An incomplete solution with a lot of services wrapped around it will provide a lot of flexibility. And pricing, well they don’t know what your product costs to make yet and you may not either. They don’t know your costs. What they do know is what’s the commercial benefit of embracing this, less some factor for risk. That’s called value pricing. Your pricing strategy needs to be value priced. When selling to an early adopter market, where you think most of the market is really just made up of these early risk-takers, what should your strategy be?

Well, you want to be selling directly because they want to buy from you directly, you’re the innovator. They want to deal with you directly and you probably want to deal with them because you learn a lot. Sell broadly because you don’t know where the target market is yet. Also sell a slightly, in fact even deliberately incomplete product which you can make complete with some flexible services. You’re value pricing it and that’s the strategy that’s going to win for the early market. This is the right strategy for the early market and it’s completely the wrong strategy for the next group of buyers. This is where Geoffrey Moore’s chasm theory comes in.

The next group are pragmatists, and they want proof

It kinda works like this: The next group of buyers are those who were not willing to be the first on board. They’re not laggards by any stretch of the imagination, their just not the early risk-takers. What is it that they were waiting for? What didn’t they have that prevented them from buying? Confidence! They needed some kind of proof.

This next group of buyers (the pragmatists) need a little bit of proof before they are willing to adopt. So what should your strategy be? Give them the proof they want. What’s the best way to give them the proof? Well, firstly your target’s a small-market. Where before you were going broad, now you’re going narrow because that small-market you can then dominate.

That small market will look around and say “gee it seems like everybody just like me is buying from you maybe it’s okay to do it.” That’s the first thing we want to do. We probably want to make a complete solution now for that small market because these are not the risk-takers. Once we’ve dominated that first target market, we’re really strong and we’re clearly the gorilla, we can then use our success to sell into another market. Maybe another couple of markets. Use your strength in one market to sell into two more markets, and use the strength in those two more markets to sell into four more markets. So it goes leveraging your strength as you go. 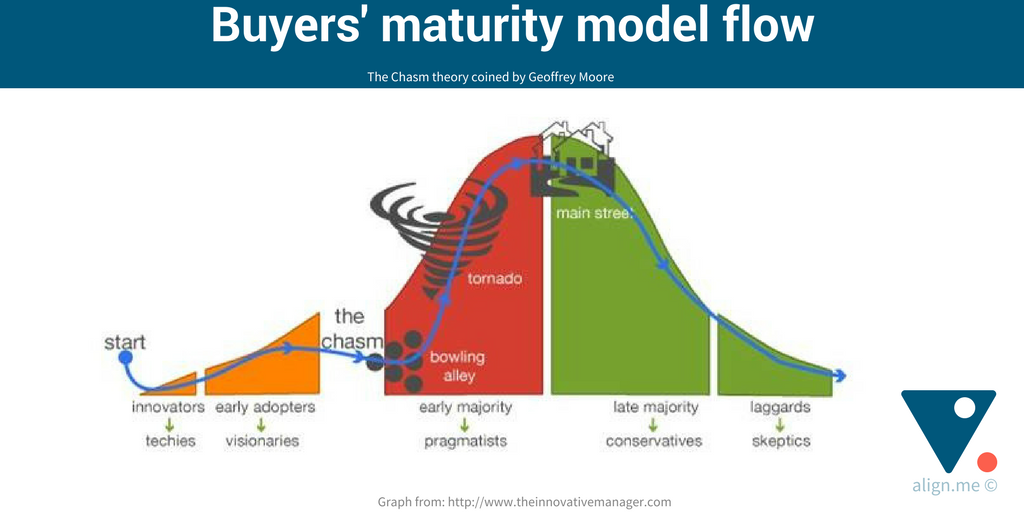 That’s what Geoffrey Moore calls the bowling alley because you’re using the momentum from your early markets to win your later markets. You’re successfully entering and winning the right to serve each of these markets all of the way through.

When the market is growing, segments don’t matter

At some point, we’ve got multiple niches that have become ours. The buyers now in other markets (that you haven’t even targeted), know that it’s safe to buy and that’s the tornado. The tornado is the fastest growth period of any market. The buyers in that market say “look it’s not a question whether I buy, it’s a question whether I buy from you or from somebody else.” That’s when our strategy has to change again. There’s no point targeting a niche because everybody’s going to buy. There’s no point selling directly because the buyer wants to buy from whomever they want to buy from, and you just don’t have enough arms or legs to sell the whole market. Now we need an extended channel and market pricing. Whereas before we’ve been preserving profits, now we’re probably going to drive pricing down to drive our competitors out of the market. Very different strategies at each point as our markets mature.

At its peak, your market demands compliance

Then the market does mature when it kind of maxes out at the top of the curve. The market is at its biggest point, and it’s just not growing anymore. The buyers know what they need and they’ll start to dictate terms to you. What should your strategy be? Well, kind of accommodate whatever they need. They probably don’t want you to bundle the product anymore, they want to buy it from you in a piecemeal fashion “I know what that does and I know what that does, and I want that bit from you and that bit from somebody else.” So the strategy now becomes really reflecting what the buyers are ready for.

Build your strategy around buyer maturity

I’ll show you how we do that in funnel plan, but before I do, let me draw the conclusions. That is, what should we do based on this learning from Geoffrey Moore?

You want to get your team together. Get the leadership team, get Sales, get Marketing, Operations, Finance, and CEO all get together. Then work out for each of the product categories that you compete in, where you think your target market is in terms of maturity. In fact, slice it even more granularly than that. List every product category and for each of the target markets that you have for that category determine how mature they are. And, work out where the majority of the market is right now. Build your strategy around what the buyers for that stage of maturity are ready for. Should you be selling direct, indirect, value pricing, market pricing etc? Set the strategy and then do one additional thing. Build a plan for the next stage in the maturity. Why? Because as soon as you start to see signs that your markets maturing and they’re ready for the next stage, you need to be ready to execute on that next stage.

In the video, I show you how we do this in funnel plan. Now you probably know that we already have chosen the target market. Well, the target market is the types of organisation and the roles within that organisation most impacted by the problem you’ve chosen. For each of those target markets, or if you like segments, we are going to identify how mature each of those segments are in terms of this problem. Are they really early on in their understanding of it, or are they really mature in their understanding of it? You’re going to choose between

Identify where each of your target segments are in the marketing funnel plan.

Don’t have a Funnel Plan? Get a free one at funnelplan.com.

Lots more lined up for next week. Until then, may your funnel be full, and always flowing.