I want to talk to the topic of sales effectiveness and, in particular, argue why walking away from a bad deal early is a good idea.

But on this occasion, I want to mount my argument by looking only at the numbers – in particular, resource numbers.

I’m going to use several factors in my argument that we need to think about when we’re looking at resourcing of deals won and lost:

We’re going to start by looking at utilisation of resources, and to do that, we need to look at supply and demand.

Say I’ve just won a deal, and you ask me how many meetings it took to win. Based on that one experience, I say “five”. That’s one meeting consumed at each of these stages: 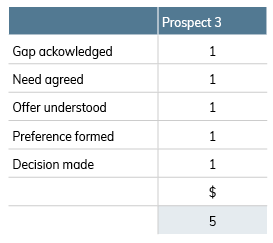 But if I’m a little bit more diligent, I should actually look at not just that recent win, but multiple recent wins.

Looking at a little more data, we can see that while the recent sale took five meetings, that was a quick one – because the last two sales each took ten meetings. So, after digging into the data, we can see my average ‘meetings to win’ number is actually closer to eight. Obviously, you would want to look at more still than only three.

But even so, that’s meetings to win. Looking even deeper at the data, we can take a look at my losses as well.

Let’s say across ten deals I’ve had three wins and seven losses (not an unusual win rate, by the way). As I look across my losses, I realise that I’ve used up 34 meetings for those seven losses (at an average of five meetings per loss).

After looking at this, we can see that the real number of meetings per win is 20. (59 meetings across three wins, rounded up).

I’ve got ten salespeople, and they do five meetings a week. But probably not every single week, because across the year they might have a few weeks of annual leave, a couple more of sick leave, some time off for training, and so on. So realistically, let’s say that there are 45 productive weeks where each salesperson is doing five meetings – that’s a total of 2250 meetings available from my salesforce. 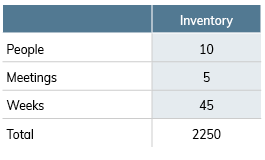 Compare demand and supply and you get utilisation

The dollar value of my sales target divided by my average deal size will tell me how many sales I need to make per year. Let’s say it’s 120.

And if I need to make 120 sales, we know that it will take 20 meetings for each of those sales (noting that I’ll win some and lose some, some will drop off early and some late). But overall, I’m going to need a total of 983 meetings for the wins. I’ll also need 1337 for the losses. Altogether, that’s 2321 meetings.

That’s pretty close to my 2250 yearly meeting capacity, putting me at 103% utilisation. 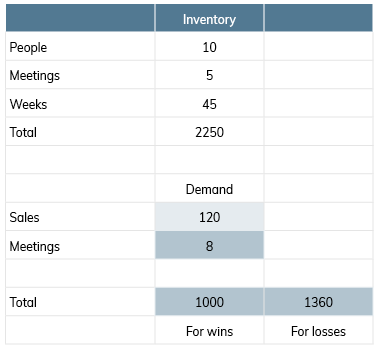 Now, what if I changed one thing and only one thing?

Let’s go back to our table where we showed all of the wins and all the losses. What if, somehow, I found out a little bit of information that would help me drop off one stage earlier for each of the deals that I lost, resulting in one less meeting per deal?

Let me show you that table.

You can see that now I only need 49 meetings for my three deals. That’s an average of 16 meetings, and now my utilisation is 87%. I can now divert that energy to other sales, or I can have a 13% smaller salesforce.

All of that to say, there’s real benefit in excusing yourself from deals that are going nowhere earlier than you do today.

When should you let a deal go?

So, leaking can be good – but how do you know when to do it?

2. The problem you solve. There are some problems that you’re considered the best at solving – these are the deals you’ll almost always win. Then there are other problems that many other competitors can also solve, so you win less often. So, think about what problem it is that the customer believes they have and whether it’s a problem that you’re likely to win at or not.

3. Read the deal. If, for example, it normally takes you five weeks to get a prospect from top to bottom using your best tactics, but somebody’s been stuck at one of those stages for considerably longer than that. That’s a good indicator you’re not going to progress in that deal, and you should excuse yourself.

Long story short: find the indicators that would let you excuse yourself from deals that you’re likely to lose. Do it right, and you can expect to get 13% more return on your sales investment. Who knows? the uptick for your business might be more.

If you enjoyed today’s story about the effectiveness of excusing yourself from bad deals earlier, then you also might enjoy a few other articles: